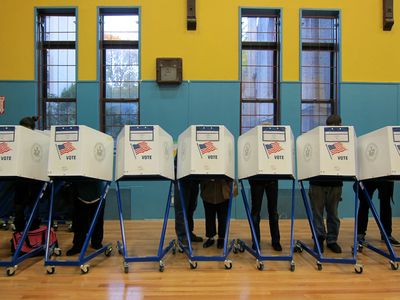 How to vote, where to avoid on Tuesday, and more Election Day intel

This is it, folks: We’re just a few days away from the presidential election on November 8, and we’re going to assume that by now, you already know who you’re going to vote for in the Presidential race. But that’s not the only vote you should know about on Tuesday: Senator Chuck Schumer is fighting to keep his seat in the U.S. Senate, and there are a number of other elected officials whose jobs are on the line.

But let’s be real, people will mostly be focusing on the race between Hillary Clinton and Donald Trump, both of whom are due to be in New York City on election night. (HRC is allegedly already planning fireworks if she wins; Trump, inexplicably, is not holding his event at one of his buildings.)

Of course, before the results come in, New Yorkers have to actually get out and vote—and here, you’ll find everything you need to know about voting on November 8, from when polls are open to what not to do in the voting booth.

Polls open at 6 a.m. and will remain open until 9 p.m. And yes, you’re guaranteed the right to take time from work to vote—New York state law states that workers who cannot take time outside of work hours to vote may take up to two hours to visit their local polling spot. (It also can’t hurt to familiarize yourself with the NYC voters’ bill of rights beforehand.)

Be warned: If early voting in other states is any indication, there will likely be long lines at the polls on Tuesday. Plan accordingly!

What to do if you’re harassed while voting

It’s not exactly a pleasant thing to think about, but considering the fervor surrounding this election, there’s a chance—however minuscule—that there may be instances of voter intimidation on Tuesday. The New York City Civil Liberties Union has you covered in that case: There’s a guide to your rights as a voter, along with recommendations on what to do should those rights be threatened, or harassment happen, while going to the polls.

One crucial thing to know: “The NYCLU’s partner the national Election Protection Hotline provides assistance to voters before and after the election, and on Election Day. Call 866-OUR-VOTE for help.”

There’s also a detailed guide on what to do if you’re harassed or intimidated from 866-OUR-VOTE’s website.

What to do with your phone down while you’re voting

Put it away! As ridiculous as this particular rule may seem, it is a rule nonetheless: selfies in the ballot booth are verboten. Save the selfie for later, once you’ve gotten your cool “I voted!” sticker and won’t run afoul of the law.

What about wearing my “I’m With Her” T-shirt?

New York state does, in fact, have laws that prohibit “passive electioneering”—i.e., wearing items of clothing that pull for one candidate or another. So if you’re planning on wearing a Hillary button or a “Make America Great Again” hat to the polls, be prepared to be asked to remove them, or to cover up a tee. (But no one’s going to stop you from wearing a pantsuit, if you so choose.)