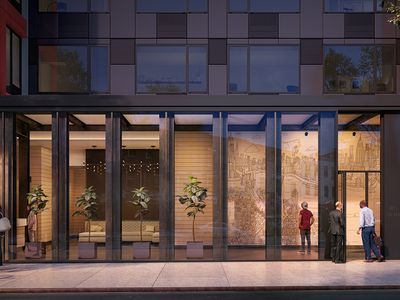 Having overcome construction delays, reports of leaks, and layoffs, Pacific Park’s modular rental at 461 Dean Street has finally launched leasing on its 182 market-rate rentals, Curbed has learned from a tip via Buzz Buzz Home. The Forest City Ratner Companies-developed project is the tallest modular building in the world at 32-stories high, and also features 181 apartments set aside for low and middle-income families, the lottery for which got underway this past April.

From the details available on 461 Dean’s website, studio here will start from $2,450/month, one-bedrooms from $3,125, and two-bedrooms from $4,750. Details on the breakdown of these apartments has not yet been revealed but Curbed has reached out to the developers for comment.

Some of the standout features in the apartments include floor-to-ceiling windows in the bedroom along with walnut floors and solar shades; a Caesarstone countertop in the kitchen and an integrated dishwasher and microwave; a custom walnut medicine cabinet and white quartz stone wall panels in the bathrooms.

Amenities in the SHoP Architects-designed building include a sky lounge and a rooftop terrace, a fitness center with a yoga/dance studio, a game room with billiards and ping pong, and a resident lounge.

Listings haven’t yet gone live on StreetEasy, but the website gives us a glimpse at the first interior renderings of the project, and offers up a host of floor plans including a curiously curvy studio unit [PDF!].

It has been quite the journey for this modular project. Things got off to a rocky start with construction being delayed due to a disagreement between developer Forest City Ratner Companies and construction partner Skanska. The latter eventually quit, and Forest City took over construction on the modular units, but reports of leaks in the building persisted, and was followed by news that Forest City may lay off a huge chunk of its modular division. But having overcome all those obstacles, the building topped out this May, and now the project is nearing the finish line. Curbed has reached out to the developers to offer more information on the leasing launch and we will update this post as we hear more.

Now check out the floor plans the developers have released.