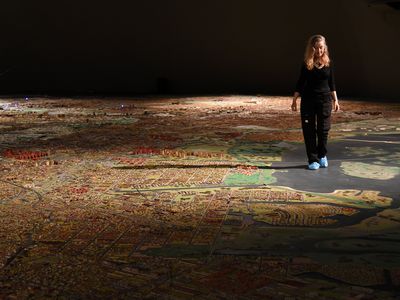 Rebecca Solnit was standing in the middle of Jamaica Bay. She had walked down from the Upper West Side, past the Twin Towers and over the Verrazano Bridge, carefully stepping over the highways and boats along Coney Island’s shoreline, before passing above the Parachute Jump and Wonder Wheel. By her own reckoning, she was about five miles high, and from there, she could see across the city to the East River, where her travel companion, Joshua Jelly-Schapiro, was standing mid-stream, examining the architecture of Midtown Manhattan.

Solnit and Schapiro were in Queens to launch their new book Nonstop Metropolis, an atlas of maps and essays exploring the complicated layers of New York City. Their launch event, along with an associated exhibit titled “Nonstop Metropolis: The Remix,” was being hosted by the Queens Museum, which provided a perfect backdrop for a conversation about the importance of cartography and place. “This is an atlas that is really about all five boroughs, and not only about Manhattan and Brooklyn pretending that they are all of New York City,” says Solnit. “So it’s great to have this big anchor with the Queens Museum, which is also a great map museum. Between the Panorama, the world’s biggest globe, the watershed relief map, it’s an incredible cartographic museum.”

A mountain of books was waiting to be signed, but Solnit and Schapiro had paused to take a stroll across the Panorama, the museum’s 9,335-square-foot model of New York City, and to reflect on their latest publication, the final installment in a trilogy of urban atlases. “I had such a sense, when I started this project in 2007, that paper maps were disappearing, and there was some real loss there,” says Solnit, who published the first atlas in the series, Infinite City, in 2010. “I worry about living in a world where people are not oriented. A world full of semi-zombied people who have never actually gotten down the block, don’t know where any of their friends live, don’t know where the fire station and the hospital are, because they have always had a phone running interference, and they have always obeyed the dictates of a machine.”

Infinite City, which offered up 22 thought-provoking maps and essays about San Francisco, became a runaway success in the years after its release, leading Solnit to follow up with Unfathomable City, a 2013 atlas exploring the terrain and history of New Orleans, and Nonstop Metropolis, the New York atlas which came out last week. For this latest publication, she partnered with author Joshua Jelly-Schapiro, a geographer, author, and fellow map enthusiast. “There is a certain magic to a good paper map, which is also an object of beauty. It can inspire you to interact with the place where you are, rather than just be led around through it,” says Schapiro. “One of the things we try and do with these maps is to try and highlight the ways in which a city is not a static thing. It’s not a simple thing, it’s a place that contains worlds.”

To encourage deeper public interaction with Nonstop Metropolis in the months leading up to its publication, the Queens Museum’s multi-layered project “Nonstop Metropolis: The Remix” installed several large-scale artworks inspired by the atlas on the walls of the museum, gave out free broadsides of a series of maps and essays, and presented public events related to each broadside, encouraging museum visitors to get out into the city with maps in hand. “The spirit of these projects is very intentionally and enthusiastically analogue,” says Schapiro. “We are very keen to inspire people to think about the ways in which they could map their own lives in the city, and deepen their sense of place and history.”

Like the other titles in the trilogy, Nonstop Metropolis can be both an inspiration and a challenge, and opening it up to a random essay or map will reveal surprises for even the most knowledgeable New Yorkers. Several sections of the atlas offer up the startling juxtapositions that made Infinite City a bestseller, include Solnit’s new essay “The Oysters In The Spire,” which celebrates “wildlife and wild lives” in New York by drawing connections between Lou Reed, the Lenape, voguing, and coyotes. Similarly, the most interesting maps in the atlas present an unfamiliar perspective on the city, like “Archipelago,” which conflates the Caribbean islands into the other islands of New York, and “City Of Women,” which co-opts the the best-known map of New York, the MTA subway map, to create a “homage to some of the great and significant women of New York City.”

In general, Nonstop Metropolis feels aimed toward a wider audience not overly familiar with New York City, and some of the essays and maps from its many contributors are attempts to provide a broad overview of the characters and events that helped shape the entire city. “We were determined from the start to have this be an atlas that was all five boroughs, that wasn’t just Manhattan, Brooklyn, and a little Queens moment or something,” says Schapiro. “But it’s important to say that these are absolutely more suggestive than comprehensive.” Several sections of the atlas also explore the familiar tropes associated with New York, or, as the authors put it, the “well known entities,” “truisms,” and “icons” which people around the world identify with the city.

In these maps of New York, the Bronx is burning, Brooklyn is brownstones and basketball, Staten Island has the Wu Tang Clan and the Fresh Kills Landfill, and Queens is a very diverse place, with many languages spoken. These sections of the atlas do not inspire the same frisson as the more unexpected observations found elsewhere in the book, but, as the authors readily acknowledge, trying to summarize New York City in 26 maps and essays is a nearly impossible task. “You know, even if we did a thousand maps, that’s still not an adequate description of New York. Even eight million maps is not,” says Solnit. “Every city is infinite, infinite piled upon infinite… But multiple maps can at least begin to indicate that richness.”

Down on the Queens Museum Panorama, where each inch represents 100 feet. “My father was actually an urban planner,” says Solnit. “We would color the contour lines in his topographic maps and make beautiful psychedelic colorings. So that’s my actual first relationship with maps.”

“As a kid who was really obsessed with landscape and place, and whatever you would call geography for a five year old, maps were inevitably going to come into play,” says Solnit. “I was a kid who loved “The Lord of the Rings” kind of books, that had actual maps in them.”

“I realized that a paper map, despite all the bullshit about new technology, is so much more interactive,” says Solnit. “A map is like: I can go there, I can do this, I could be here, I could hike this route, I could climb these peaks, I could explore this place.”

“The sense that one can travel through a document, or enter these other worlds, was always a vivid thing,” says Joshua Jelly-Schapiro. “I have vivid memories of lying on my parents’ living room floor, poring over the old Rand McNally world atlas.”

As part of the launch of Nonstop Metropolis, a reading and mapping event took place simultaneously in the midst of the new Queens Museum exhibit of work by artist Mierle Laderman Ukeles, which is also the subject of “Coming Clean,” an essay in the atlas by Lucy R. Lippard.

Rebecca Solnit read aloud from her essay “The Oysters In The Spire” in front of an image from Fresh Kills Landfill, a space Ukeles has worked with extensively, and which is also featured in a Nonstop Metropolis map titled “Trash In The City.”

The layers of interconnections created by the museum’s curators continued in the Watershed Model room, where a 540-square-foot relief map from the 1939 World’s Fair traces New York’s water supply system.

A mural by artist Duke Riley was mounted above the map, as part of the “Nonstop Metropolis: The Remix” exhibit. It was created for “Water and Power,” a map in Nonstop Metropolis tracing out the sources of New York’s energy and drinking water.

Broadsides of several maps and essays from Nonstop Metropolis are also exhibited here. “These maps—they are geographically precise. We don’t take liberties with where things are,” says Schapiro. “That’s something that has been important from the start, not to just have them be art objects but to give them utility, too.”

The map “Wildlife,” with cartography by Molly Roy and artwork by Tino Rodriguez, was one of the broadsides given out for free by the Queens Museum, and was linked to a public art event in Maspeth, Queens, titled “Chance Ecologies: Newtown Creek,” which was created specifically for “Nonstop Metropolis: The Remix.”

During the public events for “Nonstop Metropolis: The Remix,” participants were encouraged to leave the museum and engage with maps in the outside world. “There’s other traditional ways of knowing the lay of the land, and being good at navigating it,” says Solnit. “Maps are not the only way, but for for a few hundred years, they have been really essential for people in somewhat familiar—and completely unfamiliar—places.”

During “Chance Ecologies: Newtown Creek,” visitors investigated the ideas of Solnit’s essay “The Oysters In The Spire,” while also engaging with workshops, video installations, and musical performances on the banks of a federal Superfund site. “It’s always interesting with these atlases—what do people think this place is about, versus what do they not know it’s about,” says Solnit.

“That’s part of what the ‘Nonstop’ title is about, this ceaseless orbiting, coming to the center and out again,” says Solnit. “The pulsation of human movement is just extraordinary in New York, and really kind of unparalleled. That story hadn’t been very well represented, and so we represented it.”

Nathan Kensinger is a photographer, filmmaker, and curator who has been documenting New York City’s abandoned edges, endangered neighborhoods, and post-industrial waterfront for more than a decade. His Camera Obscura photo essays have appeared on Curbed since 2012. “Industrial Twilight,” an exhibit of Nathan Kensinger’s photographs of Brooklyn’s changing waterfront, is currently being exhibited at the Atlantic Avenue subway station in Downtown Brooklyn. “Chance Ecologies: Queens,” an exhibit co-curated by Kesinger, is currently being exhibited at the Queens Museum.