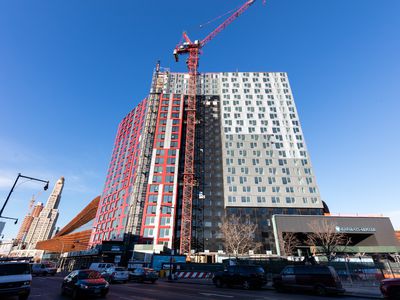 The mega-developer will sell FC Modular to a former executive

It was only a few months ago that Forest City Ratner celebrated the topping-out of 461 Dean Street, the SHoP-designed Pacific Park tower that has the distinction of being the city’s tallest skyscraper made using modular construction. And though that marked a milestone for the Brooklyn megaproject, its developer is now parting ways with the modular division that made it happen.

The mega-developer announced that it would sell its modular arm, FC Modular, to a company called Full Stack Modular—which, interestingly enough, is headed up by Roger Krulak, who was once a bigwig at FC Modular. According to a press release, Full Stack will basically get all of Forest City’s modular technology, along with its “long-term lease at the Brooklyn Navy Yard, all equipment and intellectual Property, as well as the bespoke technology created for this manufacturing process.” Full Stack will also keep an agreement made with the Building and Construction Trades Council of New York regarding workers in the division.

And while Full Stack will maintain its presence in the Navy Yard, other modular companies—most notably Capsys, which manufactured the units used at Carmel Place—haven’t fared as well. That company moved its operations to Pennsylvania, citing rising rents. And earlier this year, Susan Hayes, then the president of FC Modular, admitted to Curbed that “a dearth of available, affordable space, which is necessary for a modular construction factory” is one of the biggest challenges for this type of construction.

Forest City faced a whole other set of challenges with modular construction: After initially partnering with Skanska on 461 Dean, the collaboration flamed out in a blaze of lawsuits and accusations of shoddy construction. Once Forest City created the modular division and took over the work on the skyscraper, the building seemed to progress more or less smoothly, and it’s expected to welcome its first tenants before the end of this year. It’s constructed from more than 900 individual modules that were prefabricated and stacked together, Lego-style. But late last year, rumors swirled that FC Modular could be facing layoffs.

In a release, Forest City president Mary Anne Gilmartin noted that the sale of the modular division “allows us to put our focus on our core strengths—management of our assets and our incredible pipeline of development.” And Krulak, for his part, is extremely enthusiastic about the future of modular, telling the Times that “our systems are not only more efficient and cost effective than conventional building, but also more sustainable and community friendly.”