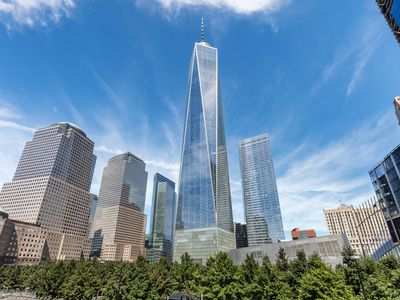 The iconic tower has been awarded LEED Gold certification

When Hurricane Sandy struck in New York City nearly four years ago, among the many things it damaged was One World Trade Center’s hopes of becoming one of the world’s largest buildings to receive LEED gold certification. But now, the tower has officially been given that designation, making it the tallest LEED building in the Western Hemisphere.

After the superstorm ruined nine fuel cells that were meant to help heat and cool the building, One World Trade Center had to briefly operate without those green elements. Despite this setback, the 1,776-foot tower, designed by architecture firm Skidmore, Owings & Merrill LLP (SOM), was able to achieve gold certification through its diverse range of sustainable features incorporated into its construction, design, and daily operation.

The building has been designed to allow for less energy consumption, environmental impact, and minimization of waste generated throughout. It was constructed using more than 40 percent post-industrial recycled content, while the architectural design allows for more than 90 percent of the office areas to receive natural light, thereby reducing much of the need for heavy electrical lighting.