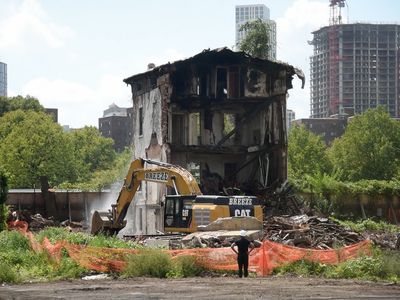 After surviving for more than a century along a constantly changing waterfront, the historic homes of Admiral’s Row are being torn down. These 10 stately residences, built between 1864 and 1901, stood on Flushing Avenue for generations, and they were among the most prominent artifacts of the Brooklyn Navy Yard’s long history of shipbuilding and maritime activity. But as a final visit to the homes last summer revealed, they had also been severely damaged by decades of government neglect. In recent weeks, four of the row’s buildings have been ripped apart by backhoes and reduced to piles of rubble, and five more will soon be destroyed, to make way for retail buildings, a grocery store, and a parking lot.

“That is the ultimate tragedy of Admiral’s Row—that those buildings got knocked down for parking. In 2016, we are knocking down 150-year-old buildings for a parking lot,” says Simeon Bankoff, the Executive Director of the Historic Districts Council. “It is embarrassing.” Although they had been abandoned for over 40 years and left to become overgrown ruins, the officers’ quarters remained an irreplaceable part of Brooklyn’s history until their very end, and it is highly unlikely that the chain grocery store replacing them will become an equally important historic structure over the next century. “This was an amenity that was publicly owned, and the government is now spending money to flatten it,” says Bankoff, who was part of an alliance of preservation groups and neighborhood activists that tried to save the buildings. “We’ve got to learn from that. We can’t allow that to happen.”

While the demolition of Admiral’s Row is a devastating loss for New York City’s history, it is also part of a much larger tragedy. Almost 10 years ago, Brooklyn’s entire industrial waterfront was placed at the top of the National Trust for Historic Preservation’s annual list of the most endangered places in America. “We’re very concerned that there’s such a rush on to demolish everything,” the president of the trust told the New York Times in 2007, announcing the designation. “The buildings really represent an important part of Brooklyn’s heritage, and it would be a tragedy to lose it.” Unfortunately, during the ensuing decade, many of the endangered structures along Brooklyn’s waterfront were bulldozed, burned, or unrecognizably altered by development. What remains today is a shoreline almost entirely transformed, with new residential towers replacing a century of older architecture, leaving behind few reminders of the urban industrial era that helped create modern New York City.

“We are losing our past. We are losing any kind of sense of continuity with the people who lived here, worked here, and built the place we are living in now,” said Bankoff, reflecting on the decade-long process of destruction that has erased Brooklyn’s once-iconic landscape of drydocks, sugar refineries, and powerhouses, while razing countless silos, signs, warehouses, and workers’ residences. “When you lose a sense of the past, you actually lose a sense of the future. Because without a past, it’s hard to imagine that what you are doing now will have any effect,” says Bankoff. “It makes you think—why does anything I do matter? It is an ugly thing to live in a timeless place.” As Brooklyn’s formerly industrial waterfront slowly fades away from our collective memory, little will remain besides the photographs and artifacts collected by those who witnessed its disappearance.

By the end of last week, demolition was in full gear at Admiral’s Row, and by the weekend, Building D, the residence in the center, would be completely leveled by a demolition crew.

Demolition crews preparing the residences at Buildings E, F, and G for destruction. Buildings H and C will also soon be torn down, leaving Building B as the only residence to be preserved.

A view of Building D and Building E, from Flushing Avenue, in the days before the demolition crews began taking them down. Decades of overgrowth and trees had already been removed, revealing a final view of their unique architectural details.

Admiral’s Row had become an overgrown forest over the past four decades, casting a long shadow on Flushing Avenue, but in the days leading up to demolition, hundreds of mature trees were cut down to make way for heavy equipment. “They just don’t give a damn about anything,” lamented one neighbor, looking out over the denuded site.

This past Friday, as workers began demolishing Building D, an enormous cloud of century-old dust and debris was released over Flushing Avenue. An inspector from the NYC Department of Environmental Protection (DEP) quickly arrived on the scene to shut down the demolition. “You can’t knock it down that fast,” he told the workers.

Employees in the Navy Yard have noted several visits from the DEP. By Sunday, however, Building D had been completely flattened. Buildings I, K, and L have already disappeared.

Building D, seen in 2015 before its demolition, was a charming three-story residence with wrought iron banisters and two attached sunrooms, surrounded by a lush forest.

In 2015, many of the buildings on Admiral’s Row still retained their original details, including doors, cabinets, fireplaces, light fixtures, and decorative woodwork.

Nature had slowly taken over the insides and outsides of the buildings, but most walls, floors and ceilings remained intact.

Left abandoned and exposed to the elements, the overgrown residences had become a wild green forest, a unique sight along an avenue otherwise lined with warehouses and truck traffic.

In May, several months before demolition began, the forest of Admiral’s Row almost completely obscured the historic residences hidden within. Many of the trees here would have been at least 40 years old, if not over 100.

The same view this past weekend, revealing the extent of the clearcutting. Most of the forested area will be replaced by a parking lot for local shoppers.

Admiral’s Row now joins the pantheon of historic structures that have been lost along Brooklyn’s industrial waterfront during the past decade, including most of the Domino Sugar Refinery complex, seen here during its 2015 demolition. “We are losing a memory of what was there,” says Bankoff. “And what life was really like in the 19th century.”

These lost historic buildings include the Revere Sugar Refinery, seen mid-demolition in 2007. By erasing the evidence of our urban industrial era, what clues will we be leaving for future generations to understand how we developed as a society? “It’s really important to understand why they built warehouses on the waterfront,” Bankoff says. “It wasn’t so that people could live in loft settings.”

The Kent Avenue Powerhouse, as it was being destroyed in 2008. Had they been left standing, these industrial relics might have helped illustrate how our activities over the past two centuries shaped our modern society, entering us into the Anthropocene Era and causing our current climate crisis.

The Greenpoint Terminal Warehouse, which burned in 2006, was largely demolished in 2007. “If it wasn’t a slow motion tragedy, it would be funny,” says Bankoff. “Thinking about what the waterfront is going to look like 100 years from now, eventually we are going to have to build levies or some kind of protection against rising water, or just not have anything there.”

Nathan Kensinger is a photographer, filmmaker, and curator who has been documenting New York City’s abandoned edges, endangered neighborhoods, and post-industrial waterfront for more than a decade. His Camera Obscura photo essays have appeared on Curbed since 2012. “Industrial Twilight,” an exhibit of Nathan Kensinger’s photographs of Brooklyn’s changing waterfront, opened last week at the Atlantic Avenue subway station in Downtown Brooklyn. Curated by the MTA Arts & Design program, it includes images from Admiral’s Row, the Domino Sugar Refinery, the Greenpoint Terminal Warehouse and other landmarks lost during the last decade.