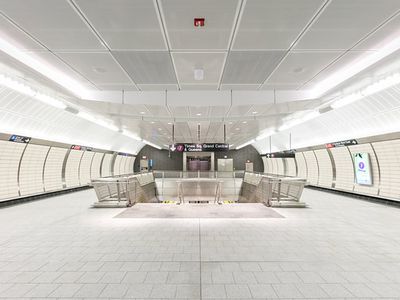 Would you ever try the Subway Challenge? The competition—undertaken by, we assume, only the most devoted straphangers—is an endurance test in which a participant attempts to travel to every single NYC subway stop over the course of a day.

There are actual rules and regulations to this challenge, particularly for those who want to attempt to beat the Guinness World Record for completing it in the shortest amount of time: They must log the time the subway doors open and close at each station, and they must have someone there to document that they did, in fact, stop at every station.

That record was previously held by Matthew Ahn, a 25-year-old lawyer who hit 468 subway stations in about 22 hours in 2015. But when the 34th St–Hudson Yards station opened last fall, his record was nullified—and so, of course, he decided to try and best his previous time. He successfully completed the challenge on a recent weekend, even besting his previous record, and the New York Times followed him on his journey.

Ahn began his journey at the Far Rockaway–Mott Ave station at 2:02 a.m., and finished it 21 hours, 28 minutes and 14 seconds later, at the Flushing–Main St station in Queens. He didn’t divulge his specific route or method, but did offer a tip for New Yorkers who may want to challenge his record down the line: start late at night (when the trains are empty), maximize the frequency of trains during rush hour, and avoid Manhattan during rush hour. “As all New Yorkers know, rush hour trains are crowded and just a terrible place to be,” he explains in the video below.

And what happened when he finished? “I would like all the food, and then I would like to sleep,” he said. Check out the video below.