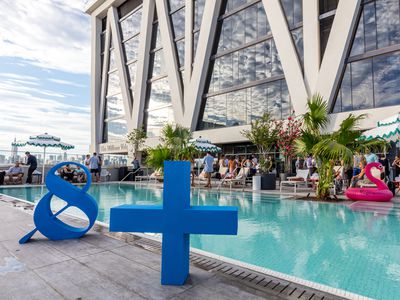 The eccentric William Vale Hotel debuts its assets at a benefit for New York’s other buzziest swimming hole, +POOL

The zany William Vale Hotel has already redefined Williamsburg’s skyline, and it hasn’t even opened yet. The 21-story building designed by Aldo Lamberis will finally reveal itself to hotel guests by the end of August, after several delayed premieres. But the hotel opened its doors prematurely on Wednesday night to host a fundraising event for +Pool, the floating pool that, once actualized, will filter some 600,000 gallons of East River water daily through a plus-sign-shaped pool before it’s redistributed back into the waterway.

The event took place on the hotel’s third-floor amenity deck, home to New York City’s longest outdoor hotel swimming pool (at 60 feet), where views of Manhattan and the surrounding borough stun. Curbed’s intrepid photographer Max Touhey also scoped out the hotel’s shimmering white marble lobby, complete with a large-scale Marela Zacarias installation, and its 15,000-square-foot rooftop to relay some of the first images of the Vale’s indoor and outdoor spaces.

Before The William Vale stood on the corner of Wythe Avenue and North 12th Street, the site was home to several of the nondescript, low-slung factory buildings that once dominated northern Williamsburg. But over the last decade, the once-industrial area has been redefined through a neighborhood rezoning and ongoing remediation that reverses years of environmental carelessness. In a way, that’s also what +Pool will begin to do for the East River.

“When we started in 2010, it was launched as a lark,” +Pool executive director Archie Lee Coates, also a partner at Playlab, says. The project’s made huge strides since then, as its developers and designers have teamed up with naval architects and engineers to develop viable technology to filter the water, and with the city to determine a location for the attraction (not to mention receive all the necessary permits—the phase +Pool is now moving into.)

The location of +Pool will be announced in September—WWD picked up on the rumor that it will be “somewhere in the downtown vicinity”—and it’s expected to dock in 2020 or 2021. But no matter where it lands, it will be another notable addition that changes the city’s landscape.