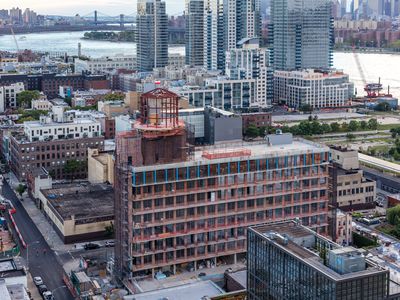 The hotel will also provide its guests with chauffeured tuk-tuks

The flashier and soon-to-open William Vale hotel might be hogging all the spotlight in Williamsburg right now, but there’s another hotel project that’s been moving along quietly right next to it. Known, perhaps not quite so imaginatively as The Williamsburg Hotel, the eight-story building, located at 96 Wythe Avenue, is well on its way completion. It appears from the hotel’s website that they’re accepting bookings starting December 1 this year.

The Williamsburg Hotel hasn’t been completely under the radar of course, as is usually the case for most large Williamsburg projects. It made a lot of news for its water tower bar, and the shell of that future space can be seen in the photo above.

Since we last checked in with this project in April 2015, the hotel now has a full fledged website, and some more details have emerged on the project. The hotel has a total of 150 rooms and they come in five different sizes—Queen, Queen Terrace, King Terrace, Studio Terrace, and Suite.

Apart from the much talked about water tower bar, the hotel will also have a restaurant, two other bars, a rooftop pool and cafe, a pop-up eatery on Wythe Avenue, and a grand ballroom that can fit up to 400 people. And in true Williamsburg trying-to-be-quirky fashion, the hotel is providing its guests with chauffeured tuk-tuks to be driven around Williamsburg. What’s a tuk-tuk you ask? It’s a three-wheeled vehicle (mostly motorized) that’s widely used in India (where it’s known as a Ricksha), and parts of South East Asia. What this will do to the already jam-packed Bedford Avenue remains to be seen.

The project is being developed by Heritage Equity Partners, the same developers behind 25 Kent Avenue—the massive new office project that was recently approved for construction. Heritage roped in Michaelis Boyd Studio to design the hotel, and the latter has also created custom furnishings for the project.